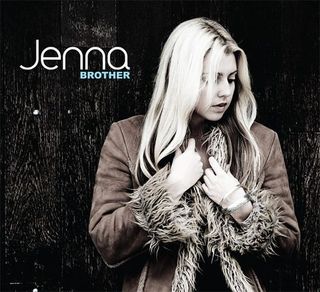 How times change. Just when the fine Devon singer-songwriter Jenna should be attracting bigger and bigger audiences, she faces an instant slump from seven figures to two. Read on to see why it's not as bad as it sounds ...

We'll get to a review of Jenna's follow-up to her debut album Barefoot and Eager in due course. Skip the whimsical thoughts that follow if you wish only to see what I think of Brother.

But how many people saw my review of Jenna's first CD and how many will see this?

What I said back in 2007 was this, as quoted - in paraphrase fashion with a little licence - in Jenna's publicity material: "Staggering maturity, winning delivery and an abundance of natural talent. An irresistible example of superior acoustic music."

Well, I was still writing for The Daily Telegraph (only just, by then not much more than the folk music reviews, though the mischief-maker in me invites you to consider what has happened to its circulation since I left).

Back then, for a Saturday edition - always the best seller of the week - 900,000 or so papers would have been bought. Multiply that by the number of people who, on average, see each copy and you get comfortably into seven figures. And then subtract the readers who a) do not reach the arts pages; b) reach arts but ignore CD reviews; c) read the CD reviews but make no apology for moving swiftly on at sight of the word "folk"; d) see the review, make a mental note to read it and then forget.

Your guess is as good as mine. Scores? Hundreds, thousands, even more? The only certainty is that the number will not dip as low as the recent level of readership at Salut! Live.

Salut! Live readers are not to blame for this. I believe it is a good site, but have other sites and real work to look after. It therefore takes a bit of a back seat and receives what visits it does by word of mouth, clickable links or casual internet browsing.

I have been encouraged to plug new items at the Mudcat forum, given the obvious overlap of interest and the simple fact that Mudcatters lead busy lives and cannot be expected to look out for themselves. The fact remains that doing so will always feel, in the absence of any partnership between Mudcat and Salut! Live, slightly seedy.

I was even, briefly, encouraged to link from the uk.music.folk group, only to be deterred, probably for life, by the earnestly grumpy chaps who patrol its shores and make such visitors feel distinctly unwelcome.

Similar reservations apply to all the other obvious places where I could place links to this site. I've pursued that route, and never much taken to it (it somehow seems more acceptable when I plant links elsewhere to my football site Salut! Sunderland).

So until I resolve these moral and ethical dilemmas, or find other ways to promote my site, as I have done with Salut! Sunderland and my main site Salut! it is doomed to the likelihood of under-readership.

But since a number of people keep on coming even when I am not posting as regularly as I should, I felt that explanation might be helpful. And I would naturally welcome any thoughts, critical or otherwise, and suggestions.

And abject apologies to Jenna for keeping her CD waiting.

I take back nothing that I said about her debut. She was still a kid, if truth be told, yet managed to display wit, wisdom and class. I knew she had something special to offer music, and I guessed that Barefoot and Eager was no one-hit wonder. I was right on both counts.

Brother maintains the summery, surfing, ocean-going mood of its predecessor.

Once again there is masterly production by Steve Knightley, from Show of Hands; really good songs and indelible traces of gifted, stylish execution. I have not seen Jenna live so can only express the hope that she fleshes out the detail of her songs' inspirations in her stage introductions; the sketchy, almost cryptic allusions to people and events, as presented in her CD notes, leave the listener feeling short-changed. Much as Jenna may protest "mind your own business", she can hardly complain if she invites us to the table of her innermost thoughts only to dispatch us with our hats and coats before the wine's been served).

It does not, in the end, matter so much. Anyone who can turn the go-to-uni/take-a-gap year dilemma into a song (No Escape) has obvious flair, and anyone who can write and perform such gems as the title track, Lundy Tide and Dawn Wave should be on her way to becoming a West Country - or national - treasure.

I love this young woman's voice and haven't the slightest doubt that it belongs to a wider stage than Salut! Live and, maybe, folk; I love her songs and feel they deserve to be heard by people brought up on a diet of karaoke talent shows and manufactured bands. But I hope against hope that she sticks, somehow and with whatever liberties, to folk.