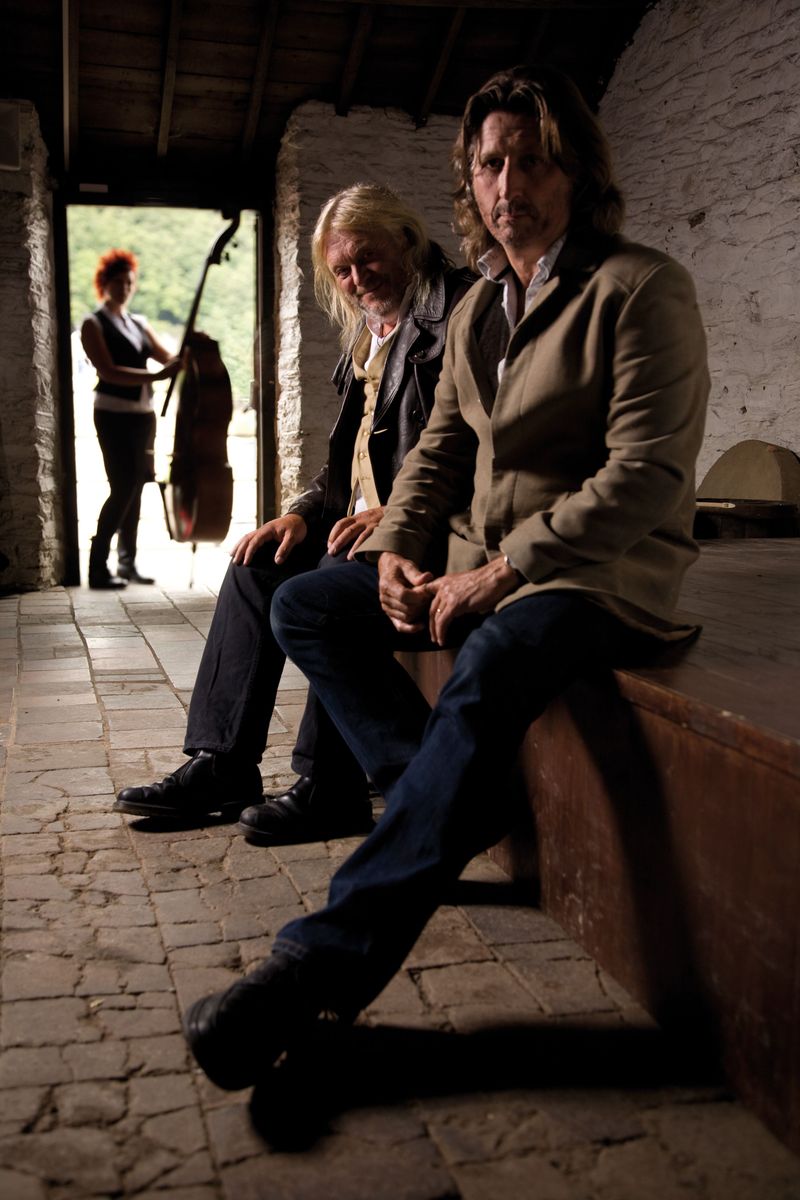 Show of Hands Arrogance, Ignorance and Greed (Hands on Music)

From my observations of ardent Show of Hands fans in assorted venues big and small, I'd guess that a typical reaction to the appearance of a new album is to look for a fresh anthem or two.

There is nothing the large camp following enjoys more than to sing along with every word, with obvious approval of the sentiments.

The lads - plus Miranda Sykes as token lass - didn't make it easy this time. There is no obvious Cousin Jack, Roots or Country Life.

Indeed the show starts with an ever-so-slow Lowlands, Steve Knightley dragging and drawling each phrase in surprising but ultimately winning fashion. As the album progresses, the melody lines are not as instantly accessible as in previous work.

Look a little deeper, though. Take a little longer (yes, I know I always say that) and the anthems are there all the same. Consider The Napoli, which tells of the container ship by that name that came to grief on the Devon coast, attracting hordes of landlubbers intent on helping themselves to the spoils, and slightly smaller hordes of people from my own trade intent on reporting on the extraordinary phenomenon.

But is it extraordinary at all? Not so, say Show of Hands. "Scratch Joe Public, what's underneath? A looter and a pirate and a thief." Whether or not we're all a bunch of scroungers and rogues, it's a wonderful refrain.

My guess is that the sympathies of the fans and, despite that stern character assessment of Mr J Public, Show of Hands lie with the looters, pirates and thieves. The supremely elegant lines borrowed from Rudyard Kipling's A Smuggler's Song should sway the undecided, but I see this song being sung with gusto and by almost everyone wherever live performances occur.


(The observant reader may detect my elaborate manoeuvres to avoid using the word duo; I am not entirely sure whether Miranda's presence is as regular collaborator or as a fully fledged member of the, um, act. Rob O'Connor's picture suggests she's knocking at the door but not quite over the threshold; someone will doubtless clear this up for me.)

The joys of this album do not, of course, begin and end with slow-developing appreciation of Lowlands or a spot of onshore piracy. There are other powerful songs among which the title track, with its strident denunciation of City fat cats, incompetent or avaricious bosses and other credit crunch culprits, impresses more than any. But I also loved the vocal interplay between Steve and Miranda - ah, but I stand corrected (see comments: not Miranda but Jackie Oates) - on The Keys of Canterbury and Phil Beer's lead vocals on Secret World, a Peter Gabriel song. Musicianship and arrangements are, as ever, impeccable throughout.

The album has deservedly received good reviews. Gone, I believe, are the absurd days when snootier folkies thought it somehow uncool to like Show of Hands. Again I stand corrected: perhaps going, not quite gone.

With their awareness of environmental and social issues, concern for the underdog and clear heads on matters of relatively modern history, Show of Hands have come up with another articulate and robust broadside for our times.

Hmm ... Steve sings on Worried Well, and that's Jackie Oates on Canterbury, not Miranda. Per a recent Phil Beer interview, Miranda is sort of a permanent guest. They've definitely left the door open for her to pursue other opportunities as they arise but are more than willing to benefit from her contributions to their live performances, etc.

Unfortunatelu, the poor reviews still crop up here and there ... http://www.folkingcool.co.uk/2009/10/25/show-of-hands-%E2%80%93-arrogance-ignorance-and-greed-hands-on-music/

Bob: Very sloppy of me. I could say I was misled by the inlay card notes but it was rather my hurried reading of them. I have to do most of my listening in the car at present because my belongings are all over the place and was aware in particular of one track with Phil handling lead vocals, but not by name (Pete Gabriel is not someone I listen to much). Amendments have been made.