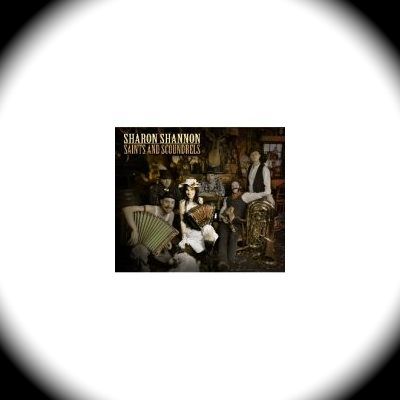 It is now an established feature of Irish music that any new Sharon Shannon album will feature not only the wonderful Co Clare accordion player and fiddler, but whichever other artists she has roped in for the session.

Session is the operative word. As Sharon suggested in her interview with Salut! Live, sessions are a vitally important aspect of her musical life. She still loves dropping into a pub to play with a random group of musicians. And that passion for sharing and for collaboration underlines each new recording project.

For Saints and Scoundrels, she persuaded - probably without any great difficulty - Shane MacGowan, the Cartoon Thieves, Imelda May, the Waterboys, Jerry Fish and Carol Keogh to add their voices or musicianship.

She is right to rave about Saints and Angels, a song written for (but not, in the end, included on) the Waterboys' celebrated Fisherman's Blues album, on which she played having joined the band from Arcady, and about the closing track, featuring Shane MacGowan.

I am not convinced, however, that either song, or indeed the contributions of the others, will come to be remembered - and demanded by audiences - in quite the same way as Steve Earle's Galway Girl, although the Cartoon Thieves' Mama Lou, with its insistent chorus recalling the Small Faces, may prove me wrong.

Even so, it is another outstanding album that reinforces the feeling that Sharon Shannon is one of music's most gifted innovators in any genre.

Let us just say that the tunes on which no voices are heard work best for me, and none more so than Cape Clear, written for the Neil Jordan film Ondine and the jaunty Lady Luck.

But that says a great deal more about my greed for Sharon's playing than about the quality of her studio guests, and takes me straight back to the Belfast bar where, not far short of 20 years ago, a stranger turned to me and said: "I could listen to that girl all night."