When you've given birth to exceedingly premature twins, what people think of how you sound on a particular song, and how you pronounce the name of a Yorkshire town, must seem desperately petty.

Cara Dillon was entitled to take that view, but didn't. In this frank and thoughtful interview, conducted by e-mail because of the huge distance between us, she has given Salut! Live great answers to both questions, and to a lot more besides.

The song is There Were Roses, Tommy Sands's harrowing yet beautifully told story of two friends from either side of the loyalist/nationalist, Protestant/Catholic divide who were murdered for what they happened to be.

A few people have criticised Cara's version, suggesting that she has the wrong kind of voice for the song. For me, the criticism is absurd. Cara - with discreet piano accompaniment from her husband, Sam Lakeman, giving subtle assistance to what she calls the "powerful message within" - gets as close to perfection as is humanly possible. I have already pointed out that the location of her upbringing (Dungiven, near Derry/Londonderry) utterly defeats the charge that her interpretation may be lightweight. Do not take my word for Cara's street cred on this issue; read what she has to say about it.

The Rotherham bit - as in "how do you say it?" - is good too, in much more frivolous vein (Cara being so intrigued by the question that she asked relatives back home how they'd pronounce it). And she talks openly about motherhood*, the meteoric rise to fame of her brother-in-law Seth Lakeman and the joys of life in Somerset.

Please read on. In keeping with Salut! Live tradition, the interviewee is allowed to answer each question exactly as he/she wishes and both elements of the electronic conversation (Q&A) are reproduced verbatim. And there'll be the usual bonus track of a quick questionnaire; look out for it over the next day or two... 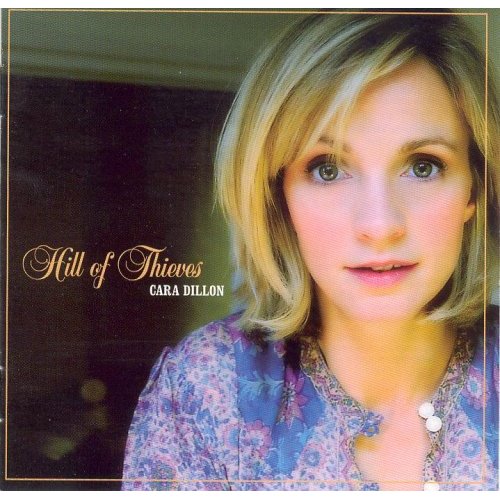 Salut! Live: Congratulations to you and Sam (plus Seth, Sean and all others associated with it) on what I believe to be a terrific album**. As you may have seen, I have torn up - metaphorically - my votes cast in critics' polls elsewhere and declared Spencer the Rover my folk track of the year. Sublime. What put you in mind of the song, and is it something you're proud of?

Sam and I were asked to do a version of the song back in 2001 for a charity album released in Ireland and we worked out the version with Seth who was on tour with us at the time. It became a firm favourite in our live repertoire but failed to make it to record as it never seemed to fit with the other material selected (until now). I've always loved the story and I think our version breathes a lot of life into a song that has been almost done to death.

Rother Ham! Where did you get that pronunciation?

Being from the North West of Ireland we have a pretty strong accent up here and it's just the way I'd say it. After reading the question I asked my family if they'd say it the same, and they all pronounced it Rother Ham... much to Sam's amusement.

And the album itself. Much more traditional than your most recent work. Welcome to my ears, but explain your thinking.

Our twin boys were born extremely premature in November 2006 and our lives immediately went on hold. We could barely sleep, let alone think about our career. It takes quite some time to come out of a shock like that and when we did we were in a very different frame of mind than before they were born. We just wanted to stay in a place that felt comfortable and this album is the result. We'd been listening to our folk albums from the seventies and were heavily influenced by the sonic character and simple arrangements, so we stripped everything back and told ourselves that it would be a straight folk album and removed all expectations for its success... pretty much the same situation we were in when we made my first album back in 2000. It came very naturally and was a lot of fun to make.

I also detect nuances in your vocals. I at first called it a
mischievous aspect, but would sultry, strident or sensual be nearer to
the mark?

Again, I put it down to me having a different frame of mind since the boys came. I literally sang each song on the album once or twice and that was it. I was so relaxed and had my mind on other things which meant I sang everything instinctively.

How much time are you able to devote to live work? Do Geoff & Joy - your inlaws - have to step in as childminders?

We still do an awful lot of live work and we have professional nannies who step in to take care of the boys, as do Joy and Geoff along with my family back in Dungiven, who help out a lot.

Who are you listening to - in folk/rock/classical/whatever?

Hardly anything at the moment. I have very little time to sit down and really enjoy music. I have the radio on wherever I am and it just soaks in. The boys love dancing to Zoe Conway's album and to Flook's Rubai. Sam would be the one with a keen ear for music at the moment... he listens to everything and has really broad tastes. I couldn't name half the albums he listens to.

How do you see your career and repertoire developing from here?

I can never answer that question as it seems impossible to predict what influences your musical journey. Every little thing in life has an effect on what you write about or how you present your songs to other people. As long as I can keep singing live then I'm happy. I like making albums and Sam loves the process, but if I couldn't get up and sing in front of an audience who appreciates the music as much as I do then it would be a depressing situation.

Tell me about life in the West Country. Is it a bit like home?

In some ways it is. Life is pretty easy going and our friends aren't from the music business so we have a very grounded home life. The further west you go the people are more and more like the folks back home, and what happens in the "big smoke" has less and less impact. It's a very rural town which is similar to Dungiven, but because we're forever flying about the place doing gigs we never get cabin fever.

Are you aware of the mixed views about your version of There Were Roses? I am utterly positive, others are disdainful of the allegedly "fey" vocals, and imply ignorance of your own very relevant geographical/cultural background. Your take on that?

I had no idea there was such discussion going on. As for me being relevant...I used to have to step over camouflaged soldiers hiding at the bottom of our drive on my way to school some mornings and couldn't drive to the end of the road without being stopped and searched at an armed roadblock, so no one can say I wasn't fit to sing that song. Whether they think I sound fey or not totally misses the point of the song. It's all about the powerful message within.

How often do you get back to Ireland? Do you find it full of
hope, or have the problems just been slipped under the peace process
carpet?


Too heavy a question.. I get back often and life has definitely
changed dramatically but there are still major issues to overcome.

You are part of a highly talented extended family (correction: two families). How do you rationalise Seth's sudden appeal to the mainstream market? Did you see
it coming?

To be honest I can't quite believe how far Seth has come and his level of exposure. It's incredible and I hope it continues. However, I do think it is restricted to him and isn't some new movement in folk music... he just ticks all the boxes and there isn't anyone else like him hiding in the wings.

Many thanks, Cara. Anyone who found those answers as stimulating as I did should return to Salut! Live 24 hours or so from now and find her replies to a series of quickfire questions. What does Cara make of the America presidential election? Of her own future? What does Somerset do better than anywhere else in the world? Come back and you'll find out....

* Cara Dillon is now 33. She gave birth to Noah and Colm in November 2006 after going into labour while on stage. The twins were three months premature, and there followed a period of great anxiety until they were allowed home from hospital in early 2007. Elsewhere, Cara has said she and Sam were "knocked sideways" by the impact of events which naturally did not end with the boys' release from hospital. It has, she says, been extremely difficult but also "an incredible journey...and seems to get better and better with every step". Salut! Live wishes all happiness and good health to her, and her family.
********* *********
** Cara's new album, Hill of Thieves, is officially released on Charcoal Records on Jan 26. In fact, it has been available one way or the other for a little while, with the result that I jumped the gun and named it my joint best album of 2008. Still, that means I can probably return to it if asked to take part in critics' polls again towards the end of 2009. The title track is an original song, written by Cara and Sam about Dungiven, Cara's home town.