Sandy Denny and Fotheringay: not three winners but four 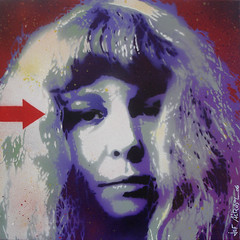 Sandy Denny
Picture: Jef Aerosol*
Another competition is over. No late flood of entries, but I am grateful to those who did take the trouble to post memories of or anecdotes about Sandy Denny in any of her guises.

As I readily acknowledged (at Mudcat), the prizes - copies of Fotheringay 2 for the three entries judged by me to be the best - were modest. So the response, here at at Mudcat and Talkawhile, was respectable. I enjoyed reading each reply, and hope that some Salut! Live readers will have followed the link to Philip M Ward's excellent appraisal of Sandy's life and work.

Philip's posting did not, however, count as an entry to the competition.

Three others stood out, at any rate for me:

Diane Easby took Salut! Live straight back its own nights, sometimes dozing off while standing up (or so it seemed - I don't recall falling), at Les Cousins, the extraordinary folk dive in 60s Soho:

I was sat on the stool in front of the single mic with my Levin, hair flopping over my eyes, about to embark on one of her songs as I was wont to do when she wasn't there. But catching sight of her coming down the steps caused the most rapid switch of song choice in musical history. Several years later, I was working at Cecil Sharp House when various members of Fairport took to dropping by to research material for Liege & Lief. Who knew that making coffee for this crowd of scruffs and "helping" assistant librarian Clive Woolf (who rightly got the sleeve credit) to dig out tune versions would result in that seminal album? I didn't.

Es Chorlton had a smashing tale of Sandy and Fotheringay in mischievous mood at the Free Trade Hall in Manchester:

Throughout the concert a few loudmouths were calling out Banks of the Nile between every number. When they got to the end of a fantastic set the band still hadn't played it but it was obvious they were going to get an encore. The yells for Banks of the Nile got louder and more insistent. "OK " said Sandy, "Do you want Banks of the Nile then?" The shouts of approval were deafening. "Righto" she said and the whole band launched into a brilliant full belt version of Chuck Berry's 'Memphis Tennessee'. Folk Rock it wasn't and we never got to hear Banks of the Nile but it was one of the funniest things I saw anyone do at a concert

Tasha did not come here to do it, but the entry she posted to my mention of the competition on the Fairport pages of the Talkawahile site was my favourite:

I am unfortunately too young to have memories of Sandy in any other way than on record. But thanks to my parents i grew up listening to her voice. As a small child I thought that Sandy was a fairy as her voice was magical to me. I'm not sure where i got the idea from but i think it was partly to do with the indistinct image on the cover of Liege and Lief and the fact that i was 7 and was getting letters in tiny script from the tooth fairy.The tales she sang about were magical and were about faeries so she must have been one right? I continued to love Sandy. I remember vividly the heart stopping moment when i heard that Sandy was dead. I was 15 time and swore I would go to Cropredy to walk in her footsteps one day...

And I said Salut! Live might dip into its own coffers and spend a few hard-earned dirhams to reward a fourth winner (same prize; will be delivered via my Amazon record shelf).

Ed Grummitt: One of two memories, from within a couple of weeks of each other in 1973:

Around the same time Sandy also did a gig at Roy Guest's Howff - tickets for this cost ONE POUND! Roy had pulled out all the stops, and a Steinway grand appeared, together with lots of candles and scrubbed (sort of) tables. We found ourselves at the same table as Al Stewart and friends, right in front of the stage. I remember Roy Guest reading poems by Dylan Thomas as a support act. This gig has gone down as maybe the best concert Sandy ever did, and I'm not about to argue. She was among friends again, and this turbocharged her confidence and her performance. "Solo" had lots of us in tears. As I've said elsewhere, the concert was recorded on a Revox - where are the tapes? Ever since that night, I've regretted that I didn't congratulate Sandy afterwards, but just sneaked out into the night. Ain't life a solo eh?

Diane, in those days a Morning Star journalist, was also at the Howff that night, and if I needed a second reason for including her among the prizewinners, it would be her wistful thought: "Why, oh why didn't I record it? Oh well, it's all there in my head."

May I thank David Suff and his the record company Fledg'ling for agreeing to stump up prizes, and ask the winners to contact me with postal addresses? Write to me at colinrandall1@gmail.com (there is a clickable link at the top right of this page).