Home Archives Profile Subscribe
Nowt so queer as getting folk in the paper (3)
Three cheers for Eliza: great music, guts and words

Every so often, the indispensable Mudcat folk chat forum produces a discussion that stirs the memory and warms the soul. And sometimes it does it twice.

Eight years ago, someone called Wesley S started a threat about Tom Paxton, the prolific American singer/songwriter whose songs seem to capture all human emotions and whose performances leave everyone feeling he was singing just for them.

Some Mudcat threads disappear from immediate view very quickly, others linger for weeks, pushed occasionally to the top by some new contribution.

After a week or so, In Praise of Tom Paxton descended gently into the Mudcat archives as the conversation petered out.

Then, a few weeks ago, Wesley S revisited the site and used the release of a new Paxton CD* as an excuse to re-start the thread, inspiring a fresh stream of messages recounting meetings with, concerts by and memories of this giant of the folk movement.

If you have not already been there, go now before the exchanges dry up once more. The thread is for you if you have ever been moved to laughter or tears, or both, by a Paxton show, sung his songs to children, partners or paying audiences of your own (I have done all of those things, albeit badly) or just want to know why a fuss is being made about a man approaching his 71st birthday.

My own encounters with Tom go back 35 years or so, when I first caught him in concert in Durham.

I dimly recall having decided I no longer cared for him, that he was becoming outdated and uncool, only to be utterly mesmerised by the warmth, wit and relevance of everything he did that night. I have seen him on a handful of occasions since, thoroughly enjoying each show, and had the pleasure of interviewing him in Glasgow while attending the Celtic Connections festival four or five years ago.

He is indeed a gentleman, with charm and talent in abundance and a capacity to remember - or, as one Mudcat contributor speculated, give a good impression of remembering - minor incidents from the deep past.

I had often heard that Tom was particularly fond of the late Maurice Rosenbaum, who preceded me as the Daily Telegraph's folk writer. True enough, mere mention of Maurice's name produced a smile and a recollection or two.

Most people who read this may already be Mudcat regulars and need no signposts. For the rest, let me just give Salut! Live's lazy man's guide to the thread, by highlighting a few messages that caught my fancy:

From Bill S in Perth:

Anybody remember him at the first Bardney festival in 71, one man and a guitar holding 30000 people spellbound, I've been a fan forever. We were invited to the Letterkenny festival in 81 with the cloggies, a great time to represent England during the hunger strikes just after a couple had died. We had no bother except a bit of stirring from a showband which roused nobody. Even in the local IRA bar, we were invited to join "tis a great loife". But there was a tension in the air from the "men with guns". Tom played the main concert, avoiding any politics except he sang "Peace will come" as an encore. The memory of it still makes my hair stand on end, the whole audience rose and bellowed the song, big Irish farmers and nuns all crying openly, how Tom lasted as long as he did, I don't know, but he left the stage in tears. If you see him, ask him if he remembers it, I'm sure he will. I always will.


You're right about Tom seeming to perform to you personally.
We saw Tom at Colston Hall in Bristol (2000 seats) - we were in row 5 of the stalls. My daughter was about 5, so that makes it 1967 or 68. Tom sang The Marvellous Toy, finishing quietly on guitar, and Cathy stood up and announced in piping tone, "My Daddy sings that song".
Tom smiled and gave a little bow to me, while our 7-year-old son covered his head in embarrassment.
Cathy reminded him of the incident in 2005, and he was good enough to pretend to remember.

And from Celtaddict in the US:

I have heard and admired Tom Paxton songs for years, of course, but on Sunday night I had the privilege of hearing him live in concert for the first time. He participated in a special concert at The Bitter End in Greenwich Village, with Liam Clancy; Odetta and Oscar Brand were among the other performers. I saw him around before the concert and kept thinking I should know who he was. I was already a fan of his songs (I believe Judy Collins wrote about a man who could write both a good love song and a hard-hitting protest song) but was absolutely dazzled when he was onstage. Dazzled seems an odd word, since he was very lowkey, personable, as if he were singing to me in my own kitchen, but dazzled I was.

Since Wesley S's first posting in April 2000 suggested to me that he lives in the American south, we can safely assume that he is not Tom Paxton's agent. Even if he were, we should be grateful to him for reviving this fitting everyman's tribute to a great man. 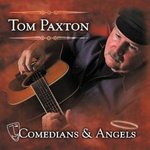 * Comedians and Angels (Appleseed) is Tom's first studio album in six years. It can be bought from Salut! Live's record shelf. where prices are lower and, if you choose another item at the same time, postage charges are avoided.