Nowt so queer as getting folk in the paper (3)

That thing that pays the rent (a very high rent if you live in Abu Dhabi) is constantly delaying postings, and Salut! Live is one of the first corners of my cyberlife to suffer.

But I have had such a heartening response to my recent article in The National, and the discussions to which its contents have subsequently contributed that I really must make time to share some of it.

The first message I received was from a colleague, Philippa Kennedy, whom I knew to be Irish but not to be a fellow folkie, more specifically one who even remembers, as I do, the Johnstons (thanks to another colleague, Lauren Lancaster, for doing the photographic honours with my old admission ticket, and to YouTube folk for the rest). 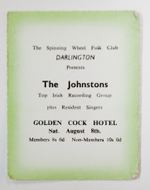 First, this is what she wrote (I quote verbatim because the names are all so resonant):

Loved your folk club piece. Actually you are not alone. I spent most of my four years at Trinity College Dublin in dingy cellars around the city where the folk scene was vibrant. I still love it - mostly Irish - but I fully intend that the last voice I hear on this earth will Dolores Keane singing Never be the Sun. (not too soon I hope)
One of my best mates in those days was Mick Moloney, one of the world's most brilliant mandolin players and now professor of Celtic Music at Philadelphia university. He was in a group you'd never have heard of called The Johnson's (had a hit with the Curragh of Kildare). The Furies were just 'oul tinkers that came in from the cold to earn a few bob (most of which they drank) and I once sat on the knee of Luke Kelly of The Dubliners who sang Rocky Road to Dublin to me on a car journey from the city to Bray. Died young, poor soul.
I used to sing a bit too. Still do. I've expanded my very traditional Irish tastes these days to embrace Blue Grass, probably because one daughter loves it. Gillian Welch, Old Crow etc.
We'd get the odd English singer over in Dublin in those days. Sorry I never made it to your club.

To which I replied:

That is a lovely message, and brings back memories of almost all the people mentioned. Had the Johnstons at each of two clubs I ran (40 pounds plus petrol/beer money from memory; they stayed at our (co-organisers') homes. Lucy had left by the time of the second visit. And I recall that Adrienne died v young. Interviewed Luke once, at a grim night club in spennymoor , co durham and he was desperately hard work, but I adored his voice.

Back to Philippa (who also allows herself gentle mockery of my role as The National's style guru):


Bloody hell. You've actually heard of the Johnstons. That's two people in a month. The other one was the actor Kevin Whately (or should I say Kevin Whately, the actor) who I know quite well from golf. We were in Portugal on the Henry Cooper Celeb Gold tournament last month and I started singing Mary of Dunloe and he joined in and knew all the words. He used to go to Dublin as a student and learned the words from a Johnstons record. Yes I heard Adrienne died young.
Mick went all serious and only plays obscure Irish traditional stuff now. ....... of course Paul Brady's a big star now and just think I used to go to gigs with them in the back of the van.
Don't suppose you play the guitar or banjo or anything. We must go up to the Irish Village next time anyone interesting is there.

I do play guitar, Philippa, but very badly. Though not as badly as I sing. Shall we start rehearsals for the Irish Village with The Flower of Northumberland, a ballad from near my part of the world, or Mary of Dunloe, from yours? I have been known to murder both.

Then a message came from another folk scribe and another Colin all rolled into one. Colin Irwin no less. Great writer, great lad. I loved this comment from his e-mail: "Just wanted to say I enjoyed your piece in The National on Ian Anderson [fRoots editor], disguised as a piece on Paul Simon. Hats off to that."

As a fellow folkie I thoroughly enjoyed reading your article “No song and dance please” in The National on Wednesday 18th June 2008.
I agree that there are still a number of folk purists out there but I do believe that the folk scene is changing to encompass an ever-wider variety of styles. The folk-rock genre continues to thrive (Oysterband are a particular favourite of mine) while some of the newer styles of drum ‘n’ bass (Afro Celts, Peatbog Faeries) would probably appeal to the clubbers of today. I also think Martyn Bennett deserves a mention for creating a fusion of traditional music and modern dance style.
I’m not normally a fan of “fusion” in any area of life and you certainly wouldn’t find me in a nightclub, however I find myself really enjoying these bands as well as the more traditional folk songs.
Personally, I believe that a musician is defined as someone who can actually play an instrument and/or write a song. I still don’t get the whole DJ as artist thing…aren’t they just playing music created by other people, erm musicians? And no-one will ever convince me that Britney Spears is a musician.
Your comment “a lifetime of being mocked for my musical tastes” certainly resonated with me: as a teenager in the 80’s you can imagine the ridicule I endured for being a fan of folk. But I didn’t care, in the dearth of musicianship that was that dreadful era presided over by Stock, Aitken & Waterman, I listened to Dylan and Cohen on my Walkman and developed the ability for independent thought.
This year will be the first time in 22 years that I have missed the Cambridge Folk Festival, due to the fact that I am due to be giving birth to twins that weekend in a feat of the poorest scheduling known to man. Next year, though, my kids will be inducted into the family tradition – in my family we have Christmas and we have Cambridge.

Not for the first time. Salut! Live is also indebted to "Sir Robert Peel", whose note about me being a "journalist extraordinaire and Bloggamist" sent lots of people scurrying tappy lappy this way from Talkawhile (the Folk Corporation Forum). In case any have decided to stick around, let me say you are most welcome.

People who contribute to the Mudcat folk chat site also chipped in (after, it has to be said, being alerted by me to my piece in The National).

Some extremely kind words were posted, all of which I am far too modest to repeat here but which I am not too modest to commend to Salut! Live readers wishing to follow this link to the discussion, which began as a thread called Celebrate Folk.

And finally, the exchanges at Mudcat have also led to a charming correspondence with Azizi, a lady in America, who along the way introduced me to cocojams.com, a smashing site of her own which, among many other things (African/American slaves' songs/Mardi Gras Indian chants/sorority strolls and cheerleader cheers), spreads word about school playground chants, rhymes and taunts.

The Cocojams body of work is now suitably enriched by this one, remembered from my own schooldays:


No more school, no more stick
No more rotten arithmetic
No more English, no more French
No more sitting on the old school bench.

Was trawling internet for compact dish drainers one minute, listening to Luke Kelly's last public performance the next. Where in Spenny was interview? Saw Dubliners in Spenny Variety Club early evening before they moved on to Newcastle, got all of their autographs before they slung themselves and instruments into van.
Did I see you last in Castle Folk Club - Bp A, several decades ago? and have you stopped smoking?

I saw them there, too. Interviewed Luke for the Despatch, though it was tough getting even a few words out of him. Great voice, though, much missed.

I haven't smoked for as along as my elder daughter''s been alive and that is 33 years! Maybe I should have vowed never to drink again when her sister came along.
Anyone who last saw me in the Castle must be as old as me. You must tell me more ...