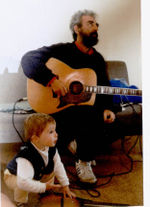 It began with my posting about Irish music, specifically about songs that came out of the Troubles.

"Captain Ginger", who turned out to be a man I knew when we were both Fleet Street reporters, added the following comment:

I'm a huge fan of Mickey MacConnell's Peter Pan and Me. Too often only remembered for Only Our Rivers Run Free (written at a preposterously young age), Mickey has written some excellent songs since, of which Peter Pan... is one. Yes, it's another sad and elegiac song, and yet another from ostensibly a nationalist viewpoint, but it's wonderfully poignant and transcends any divide. Of his other material, The Boys of the Byline Brigade should appeal particularly, as it should to anyone who has had dealings with the Night Desk.

I replied with my own recollection that the song was the work of another former colleague, Geoff Lakeman, the father of Sean, Seth and Sam, father-in-law of Cara Dillon and grandfather to the sets of twins born to Cara and to Sean's musical and romantic partner Kathryn Roberts. Why, I'd seen him sing it, accompanied as ever on his concertina, at a farewell party for a mutual friend and fellow-hack, Syd Young.

Our captain would not let go. Geoff might seem an obvious candidate, he said, but Mickey, for many years a sub-editor on the Irish Times had not only claimed authorship (at this Mudcat thread, also reproducing the lyrics), but recorded it on his 2000 CD Joined Up Writing.

By now, and not for the first time, I was beginning to doubt the accuracy of my memory. Maybe Geoff was just singing someone's else's song. I had no immediate contact details for Mickey, but have known Geoff for more than 30 years. So despite living thousands of miles apart, it made sense to ask him.

But before I allow Geoff to supply the definitive explanation - definitive, that is, until the next one comes along - I must invite Anne Kennedy Truscott to the stage. Her comment, posted to the original discussion and therefore in danger of being overlooked, reads:


The Boys of the Byline Brigade" WAS written by Mickey MacConnell and not by Geoff Lakeman. Mickey, singer/songwriter/journalist, and Geoff knew one another, years ago, and Mickey told me that he used to joke with Geoff that one day he'd write a song about the journalism profession, and did so, but this was sometime after they had gone their separate ways in life. I sang one of Mickey's songs in a folk club in Devon about 15 years ago and Geoff, who was there that night, told me he used to know Mickey. On my next trip back to Ireland I mentioned meeting Geoff to Mickey and he told me to tell Geoff that he had finally got around to writing that song, "The Boys of the Byline Brigade". I duly told Geoff this on my return. Due to the passage of time, I cannot now recollect whether I gave Geoff Mickey's contact details, or whether I merely passed on a copy of Mickey's song to him, but I do recollect that Geoff wasn't aware of the existence of the song until I told him that Mickey had finally written it.

That's it, then. Isn't it? Um, not quite. Here is what Geoff himself calls a convoluted answer:


Mickey MacConnell - Irish News or Irish Times journalist brother of the Boys of the Lough flute player - wrote a song with the same name back in the early 70s when we were all covering the Ulster Troubles together. I heard him sing it once- couldn't remember any of the words. A year or two after I wrote to him, asking him for the words enclosing a fiver or a tenner for a drink ...never heard a word from him.
Some time later I "borrowed" the title and wrote an entirely new song as a paeon to past Daily Mirror news veterans. It has now gone into legend as the only folk song written about Fleet Street*.....verses have been added and changed over the years. The most complete version was probably performed by me at the Grosvenor Hotel in London when we had a huge get together to celebrate the late Richard Stott's career editing . The words of the song appear in Read All About It, Bill Hagerty's book published to coincide with the 100th anniversary of the Mirror. I still get bullied into singing it at Mirror Christmas parties and, sadly, the passing of ex-Mirror journos. The tune is my own .......apart from my admitted plagiarising of the title there would be no similarity between my song and Mickey's. I would love to hear his...and hear how he is.

There you have it. Another folk whodunnit solved, or seemingly so. Mickey, I gather, retired to Kerry but has suffered indifferent health in recent years, though that is all I know (the picture is taken from his own site). What happened to the alleged fiver or tenner is also beyond my knowledge, save to say that even if Mickey pocketed it, I bet Geoff found a way of claiming it back on his expenses.

As for the rest, Capt Ginger turned out to be Gervase Webb, formerly of the London Evening Standard but now living in West Wales where, at the time of his writing, he was describing himself as "Gervase at Heolas, smallholder and builder. And lambing's just finished, so that's one of the year's big worries out of the way!" I share his admiration for Mickey MacConnell's work, or at least that part of it - Only Our Rivers and Tinkerman's Daughter - known to me.

And why the * ? Because Geoff is wrong. Leon Rosselson has certainly written about Fleet Street, and in the most disparaging terms. I will dig out the reference**. And perhaps Geoff can supply the lyrics to his song......

** Song of the Free Press from the album Bringing the News from Nowhere (and I think it appears on at least one other Rosselson record, too).

Dear Colin,
Thanks for contacting Geoff Lakeman and clearing up the matter. Thanks also to Geoff for helping to eliminate the confusion. I am a long standing friend of Mickey and his wife Maura since the 1980's, and I'm a great admirer of his superb ability as a songwriter. I have often heard him singing his Byline song, and being a firm believer that a songwriter should always receive due credit for his, or her work, I'm afraid I went ballistic at the idea that someone else was apparently being credited with having written "Mickey's song" !! Hence my posting onto your website, in Mickey's defence !! Not ever having heard Geoff Lakeman sing HIS Byline song, I had no idea that there existed a SECOND song with the same title. It was only after reading your latest blog that I now dimly recollect that, when I passed on Mickey's message about having written the song to Geoff, that Geoff had muttered something about having sent money to Mickey for the lyrics and hadn't received them ..... which means that I was incorrect in stating that Geoff wasn't aware of Mickey's song till I had told him about it, and Mickey had obviously completely forgotten that he had performed his song in Geoff's hearing on an occasion some 20 odd years previously. My apologies for my faulty memory. The passage of time does strange things to everyone's powers of recollection !!
When I moved from temporary residence in Plymouth to East Cornwall in 1995, I stopped going to the folk club in Devon and consequently have not seen Geoff since then. I would dearly love to hear Geoff's Byline song..... hint hint !!
Mickey is still making good music and writing great songs and playing regular sessions with his fellow musicians, both locally in the Listowel area and further afield. On my regular trips back to Listowel I delight in the opportunity to attend at least one of these great sessions. Mickey is on you tube and can be seen if you go to............
http://www.youtube.com/watch?v=zRRcJNvKqH8
http://www.youtube.com/watch?v=N98OEvvgeSg&feature=related
and lastly, accompanying piccolo player Jim Gornall, one of the fellow musicians previously mentioned)
http://www.youtube.com/watch?v=Zi07rieCRP0

Thanks again for investigating and clarifying that there are TWO songs with the same title.
Best Regards,
Anne Kennedy Truscott