The beauty of English

Ducking the verbal bullets from snipers over at the UK Music Folk discussion group, I felt the need for a reminder of how wonderful a language English can be.

If I had brought the album with me to the Middle East, I might have put on the Tony Benn speech to Parliament about the destruction of the coalmining industry, a model of elegant rhetoric made all the more stirring by the addition of music from the Grimethorpe Colliery Band.

Or I could have chosen, in a similar vein, the sequence of the film Brassed Off (which also featured Grimethorpe) that has Pete Postlethwaite's marvellous Albert Hall speech. In another place, I reported that the scene was recorded in a single take and the cast and crew were in tears. My prized video of the film also rests in another continent.

So I turned instead to Graham and Eileen Pratt and Leon Rosselson.

Let me begin with the Pratts and their new album, The Greek King's Daughter on their own Grail label:

There can be few finer ways of experiencing the beauty of English than to listen to Eileen Pratt's singing. I have had the pleasure of hearing her at the folk clubs she and her husband visited in the West Country when I lived in Bristol, and it has occasionally struck me that she is one of those great singers best heard in live performance. For once, however, the studio production is a match for her natural gifts.

One of my first actions on receiving a new Graham and Eileen Pratt album is to head smartly for what I shall call the big Eileen ballads. Three stand out here: Donal Og, which inspired the album title, Lass of Glenshee and - not its first outing - the glorious Lark in the Clear Air. I could listen to them over and over again; indeed, I do.

But the pleasures of listening do not end with the purity and power of Eileen's voice applied to such demanding songs, and Graham's contributions - yes, the exemplary musicianship (guitar, harmonium and concertina), but also as a singer - should not be overlooked. Bright Morning Star showcases the couple's command of harmonies, but in truth there is no hint of a weak spot.

From start to finish, the album has all the fuel and distraction I need to get me painlessly through the Abu Dhabi traffic. The Pratts have not been especially active in the studios of late, at any rate as a couple (there has been a series of CDs with their choir, the Sheffield Folk Chorale), but they have managed to break the silence with an excellent illustration of how they earned such a high place in English folk music. 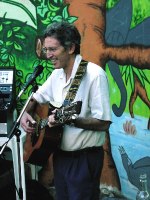 Beauty comes in many forms. No one has ever accused Leon Rosselson of having an exceptionally attractive voice, perfect as it is for the sort of songs he writes. Rather, it is that writing, as his new record, A Proper State (Fuse), shows yet again, that has beauty in abundance.

No composer of songs in our native tongue, it seems to me, gets close to his level of eloquence. Whether addressing weighty world issues, or the foibles of human behaviour, his powers of expression should make any would-be songwriter envious.

Take Conversation on a Mobile. On first acquaintance, it is merely an extension of familiar laments about the pointlessness of 75 per cent of cellphone exchanges. Listen more intently and it becoms clear that there is nothing simple about its construction; the wordplay and melodic development combine with stunning effect to reflect failures of communication in both the garbled "I'm on a train" conversation and one couple's relationship.

In the hands of a master of his craft, it is not remotely jarring that we should proceed from the mundanities of everyday technological and emotional breakdown to The Ghost of Georges Brassens, Rosselson's homage to a giant of chanson francaise.

And there is no shortage of political thought, from The Third Intifida to The Power of Song. Here's a confession: Rosselson's work used to be a source of mischievous pleasure. I would couch praise in terms that allowed the more stereotypical Torygraph readers (and editors) to think I might still be on their side. While plenty of readers and editors upset those stereotypes anyway, and though I certainly do not always agree with Rosselson, it is a new source of pleasure to be able to commend his latest gem without feeling the need to waffle on about the wit and style- overcoming any quarrels with the sentiments.