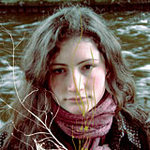 ...........in which we learn Rachel Unthank's thoughts on film, literature, music and life - but mercifully hardly anything on Sam Allardyce and nothing on Keegan (Kevin, not Niopha) circus. And after the torrent of words over the last couple of days, it couldn't be much shorter or sweeter

Best album ever was.....too hard! Currently The Lark Descending by Chris Wood, Illinois by Sufjan Stevens, I see a Darkness by Bonnie Prince Billy, No Earthly Man by Alasdair Roberts

And best book.....A Room with a View, EM Forster, haven’t read it since being a teenager but it stands out in my mind

Most memorably bad was....I try to wipe them from my memory

Life on the road is.....like being in a bubble

Singer I most admire is..… Sheila Stewart, June Tabor, Nina Simone, Stevie Wonder, and my Dad!

And musician......all the musicians in Lau and Charles Mingus

The thing I like best about being a singer is...singing itself. It makes me feel right. The old cliché is true, it really is good for the soul. Everyone should try it!

And what gets up my nose is....pettiness

I relax by......sleeping, swimming, day dreaming. I like my food and drink too (a bit too much!)

In the concluding section of the three-part Big Interview, Rachel Unthank talked about the state of British folk and more besides.