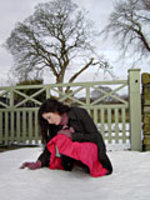 Now that the dust is settling a little over the animated and sometimes intemperate debate on the merits or otherwise of Rachel Unthank and the Winterset, it is time for Salut! Live to talk about the raised profile its part in the discussion has won.

Perhaps I can be forgiven for having dropped hints at a few of the more popular folk music discussion sites. It would certainly have been a shame if Rachel's willingness to answer my questions so fully and candidly had not been rewarded by a reasonable level of interest in her words.

In the event, I could not have hoped for better. In the 10 days since the first of the articles appeared here, Salut! Live has recorded almost 1,000 "unique visits", which may not be a huge figure but is five times higher than the readership for the preceding 10 days.

It goes without saying, but will be said anyway, that a warm welcome is extended to everyone who has wandered this way, and especially those who have found other material - the Kate Rusby, Martin Simpson or Flossie Malavialle interviews, perhaps, or the Vin Garbutt/Cambridge Folk Festival discussion - worth exploring.

The almost complete absence of discussion among Salut! Live readers is not especially important; indeed it it misleading, since many people who are directed here by references posted by me or others at the Mudcat, UK.music.folk, fRoots or BBC forums, return to their natural habitats to continue the debate there.

So thank you all for coming. Please drop by again. And I leave the subject of Rachel's band, for now, with these extracts - grammatical/spelling warts and all - from comments elsewhere:


I went to see Rachel Unthank and the Winterset last night in Brighton. Not seen them before but have The Bairns and really like it. I was a bit concererned when I heard about Belinda O'Hooley having left so recently and that poeple were saying she was a really big part of their live show. I have to report that they still appear to be capable of putting on a captivating and magical evening's entertainment despite this recent change of personnel.
It was a fantastic show. The music was stunningly performed, really bringing to life the ghostly qualities of the record. What an amazing voice Becky has and how wonderfully the two sisters' voices blend. new piano player Stephanie Conner seemed confident, joining in the chat and providing dramatic piano and excellent backing vocals. Niopha Keegan on fiddle, accordian and voice was also outstanding....
Too many highlights to single out many songs, but Sea Song is a favourite and just blew me away....Great band, great show, nice people. See them if you get the chance.


I'll take a pseudonym, so as to avoid the mud-slinging that seems to be aimed at GUESTs.
I won't reveal my identity. It would be worth remembering that many here may conceal their identity because it would be professionally indiscreet to reveal it. I'm nothing to write home about, but as someone at least vaguely associated with the folk/roots musical world, it makes little sense to nail my colours to the mast on the subject of someone I might meet, bump into at a festival, work for/with.
Just to count myself out of a few of the other generalisations above, I like Show of Hands and Seth Lakeman, so its not about success.
My objection to the Winterset is the clear victory of marketing over content; the disparity between ability and perception. This is ever more apparent with the departure of Jackie and Belinda, both of whom could be considered to have been propping the band up, in my opinion. Admittedly, one person's raw, honest singing is another person's untrained, out-of-tune wail, but afraid I'm closer to the latter category than the former where the Unthanks are concerned.
My question is this; why have they received the attention that they have? Is it to do with the music, or is it to do with a strong, some might say overly so, manager/agent? ....Are folk audiences so gullible as to be taken in by a few choice quotes from "famous" or "mainstream" types (the Phil Jupitus one springs to mind), or are there some more discerning types about?


It's the voice - out of tune pretty much all the way through, vocal lines
audibly stitched together from multiple takes without much attempt to
disguise the different recording levels, and an emotionless monotonous
delivery. The backing tracks are inventive and well-worked, it's just a
shame that they forgot to replace the rough guide vocal with properly sung
retakes before releasing the CD. There's software which will fix the tuning
problems in post-producion if the artist can't.

With absolutely no interest, vested or otherwise, to declare, Salut! Live is firmly in the "pro" camp. So to even up this part of the exercise, let me quote from my former (and distinctly non-folkie) colleague David Cheal's review in the Daily Telegraph of the band's gig at the Borderline in London W1:


The vernacular delivery and acoustic instrumentation are pure folk, but the arrangements are darker, spacier, eerier. In Rachel and Becky they have singers whose voices mesh almost into one when they harmonise, but whose solo singing is distinctive, Rachel pure and clear, Becky husky and grainy, reminiscent of Beth Orton.
Among the stand-out moments of an outstanding evening were Becky's gorgeous rendition of Nick Drake's River Man, the perky, uplifting Blue's Gaen Oot O'the Fashion, Robert Wyatt's deeply peculiar Sea Song, the gorgeous Fareweel Regality, and a wistful Away from Hexhamshire, with sweet, gentle accompaniment from the audience.
In between songs, the women chatted garrulously among themselves ("I was worried my skirt was tucked into my knickers," giggled Connor at one point).
So: a lovely night. For a while, darkness and death loomed large (I lost count of the number of songs about dead babies), but they were ultimately banished by warmth, sweetness and beauty.