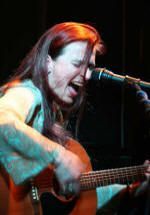 If I introduced you to a French singer whose stock in trade included the powerful ballads of Edith Piaf, the clever lyricism of Jacques Brel or even a song from a Francophone Canadian, Kate McGarrigle, you wouldn't bat an eyelid.

But what if I went on to say that here was a chanteuse who felt equally at home with the work of Vin Garbutt, Kieran Halpin, Allan Taylor, Colum Sands and Buffy Sainte-Marie? That, whatever we also think of La Môme and Brel, is when the story of Flossie Malavialle becomes especially interesting to Salut! Live.

To my deep regret, though I know a lot about Flossie and her life in, of all places, Darlington, I had not heard her sing until today, when I caught her YouTube clips (I will post one with this article). Et quelle voix! And after that first acquaintance, Flossie is the subject of a rare specimen indeed, a new year's resolution I actually propose to keep: to make sure I go on to listen a lot more of her music.

Salut! has other reasons to find her an intriguing character, of which more later. But it is also true that I instinctively warm to anyone who enjoys the heartiest of endorsements from some of the people I most respect in British and Irish folk:

Colum Sands Flossie has a voice as clear and tuneful as a lark, with a pureness of quality to stop you in your tracks in the forest of a song

Vin Garbutt Flossie’s great! She came over from France and wowed everybody with her sensational voice, her gutsy guitar style, eclectic repertoire and franglais patter

Kieran Halpin To have a song covered by a voice with the beauty, clarity and passion of Flossie is a pleasure that should be enjoyed by all songwriters

Allan Taylor Flossie is inspiring! She sings every song with such skill and commitment. She even sings my songs better than me! It’s great to have her on our scene

Flossie may be an adopted County Durham lass these days, but hails from a sunnier spot. She was born in Nimes in April 1968. To the north, there were the first rumblings of the rebellious Paris spring; on our side of the Channel, Louis Armstrong was top of the charts with a double A side smash What A Wonderful World/Cabaret.

Her father's job as a headmaster took the family first to the much chillier northern city of Arras, then back south via a four-year stint in the Lot to the lesser known Ganges, a town near Montpellier rather than the 1,500-mile river that flows from the Himalayas to the Bay of Bengal.

Maman Malavialle played piano and Flossie would find words to sing along to the classical pieces she heard so often. At 10, she received the Beatles Red album as a Christmas present and was able to combine the musical revelation that represented and a blossoming passion for the English language.

The guitar came four years later, another cadeau de Noël. She picked up basic chords from her science teacher and fairly quickly found that songs such as Let it beand Here Comes the Sun" were not beyond her.

"But everything I learnt was by ear as I never had a musical education at school," Flossie tells me. "I quite enjoyed it as I could sing along to my favourite numbers. It's then that people around me realised that I was singing in tune and had a strong, steady voice. I was just enjoying it! And still do to this day."

At 20, she joined a band playing a broad mélange of style at village fairs across the south of France. Anyone who has seen these ensembles will know that fronting one as lead singer would provide a musical education intense enough to make up for any holes in the school curriculum.

Flossie, a bright student who was always a year ahead of her age group, was an English graduate and teaching by the time she was 22. Her first school job took her Charleville-Mézieres in the Ardennes, her second back to the city of her birth, Nimes.

Darlington was not exactly her first choice when she decided to try her luck in Britain. Edinburgh, for reasons us Durham lads would find hard to fathom, seemed somehow more appealing.

But her hopes of a posting in Scotland led nowhere, because there was no Scottish teacher wanting at just that moment to head in the opposite direction.

"That," she recalls with commendable lack of bitterness, "is why I ended up in the North East of England." Oddly enough, there was someone in Stockton-on-Tees who thought she would find the south of France more to her taste "so we literally swapped jobs for a year.....she taught English in my school and I taught French in hers".

Salut! Live, I have decided, is not the place for Flossie's deeper - and somewhat mixed - thoughts on life in the North East. These have been found a home at the parent site, Salut!.

But this is emphatically the place for her reflections on music.

Please return to the site for a second instalment dealing with her musical preferences, from the Beatles and Piaf to Vin, Kieran and the other singers mentioned earlier. You'll also learn how she was drawn into the British folk scene, and about the gaps in her knowledge of the music.

And if that still leaves you curious, stand by for word on Mambo the bilingual hound and the art of Anglo-French dreaming.