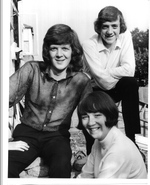 A long time ago, in the south-west Durham of my youth, I sipped my ale and listened to a Scottish folk trio called Bitter Withy. The venue was a pub then known as the Surtees Arms in Shildon, and the music was wonderful, with a magnificent female lead singer and a terrific repertoire that included the song from which the trio took its name.

Or have I just been dreaming? Did I really see anything of the sort?

I pose the question because until last night, I hadn't the slightest doubt in my mind that the singer was none other than Barbara Dickson, an occasional visitor to the North East in those distant times.

But when I turned to her for confirmation of my recollection, Barbara let me down. 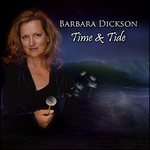 This test of my powers of memory began innocently enough when I posted a reply to a newly created thread at the Mudcat folk forum entitled Review: Time and Tide, Barbara Dickson.

The subject interested me, thought not nearly as much as did the desire to stop myself checking the latest bits of spite and nonsense at another Mudcat debate, on whether Rachel Unthank is any good.

In the rant-free thread about Barbara, Catherine Jayne gave the Time and Tide playlist and described the album as "easy listening and highly recommended" (I hate to think what Rachel's detractors would make of that kind of praise).

In my reply, I asked whether anyone else loitering at Mudcat was old enough to remember Barbara in Bitter Withy, which I recalled as a "superb trio, crowned by Barbara's voice of course, and what a song to name yourselves after".

A subscriber posting as Eddie1 was quick to dispute my comment. "Bitter Withy," he wrote, "were Andy Ramage, Tich Frier and Lesley Hale. To the best of my knowledge Barbara was never a member. She was a member for a while of The Great Fife Roadshow."

But I knew better, didn't I? Well, I did know for sure, or so I thought, that I had seen exactly what I claimed to have seen. "Could it be that she stood in for Lesley on one occasion or more?" I asked. "My memory insists that I saw her in the trio in folk clubs in the North East."

I checked the Barbara Dickson website, and found a reference to her playing alongside Bitter Withy. That didn't help me at all, so I contacted Alan Clyde, who looks after publicity for her.

Quick as a shot, the reponse came back: "Barbara says, 'no, I was never in Bitter Withy. I can't remember the woman's name who was....the boys were Tich Frier and Andy Ramage'."

Since I have written on at least one previous occasion about what turns out to have been Barbara's ghost appearance or appearances with Bitter Withy, I should repeat here the apology I posted to Mudcat for this alarming lapse in memory.

Barbara, should she turn to Mudcat or indeed to these pages, is now able to refuell her own memory thanks to the reminder of Lesley Hale as the female part of the trio.

And a few Mudcatters know now, from Hazel - or "Pistachio" - that Lesley is still active in music, singing at Newtongrange folk club south of Edinburgh most Wednesdays. That is where Hazel's twin sister sings too and it is, she says, "thanks to Lesley that I started singing out in folk clubs".

When I posted this article, I asked anyone with a photograph or further details of Lesley, and her former Bitter Withy partners, to pass them on to me. Thanks to Jim McLean, a producer whose songwriting triumphs include Smile In Your Sleep (Hush, Hush) and The Massacre of Glencoe, the picture search is over.

That is because Jim's wife is Alison Chapman McLean, a quite superb photographer who has captured so many of the luminaries of our music. For more of Alison's work, go to this link.

But this strange episode leaves me indebted to Eddi1, too, for his magnanimity in victory. "If that's the worst trick your memory plays," he assures me, "you're doing fine. You were dead right in saying they were a superb group."

I have just produced a book of Alison Chapman McLean’s iconic photos of folkie from the 1960s and beyond. It’s really a legacy to Alison’s memory.
It’s called Mainly Troubadour and can be purchased from me. It’s a hard back publication and costs £15 plus £3 pp. The photos include Martin Carthy, Jeannie Robertson Bob Dylan, Billy Connolly, Martin Windsor, Redd Sullivan, Louis Killen and many more.