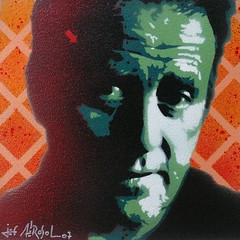 Not quite in his league
Image:Jef Aérosol
Who wanted to be a folk singer? Professionally, I mean, not just getting up, as many of us did, to do floor spots at the local folk club.

But the will was there, as I was reminded during my recent moving epic when poring over old letters that passed between my (then) future wife and me.

It bears no date, but the contents make it clear that it was written when I was still living in Shildon, Co Durham and Joëlle was back at home in Le Mans.

The letter began with some waffly excuses for not writing enough. Later I revealed a modest improvement in my parlous financial position; my boss, the editor of the local paper where I worked, had said I could start charging all of £1.50 a week in expenses for writing a folk column.

Then these words appeared:


"Also, folk music looks like beginning to pay me. Phil Steele and I have a booking a Guisborough on Jan 29. We'll get £8 inclusive."

You may not think that amounts to much. But I am talking about prehistoric times, 1971 to be precise. And a half share of £8 went a long way in those days, as did even 30 bob. Why, I even posted something at Mudcat a few months ago suggesting that I used to get away with paying Vin Garbutt £3 at my own club, though that would have been a little earlier.

Phil was the driving force behind this emerging duo of ours. He played guitar exceptionally well and had a reasonable voice and interesting trad, blues and contemporary repertoire.

He did his best in the days leading up the gig to draw me sufficiently into his world so that we would look as if we knew roughly what we were doing. But in strict observance of the rule that you can take a horse to water but cannot make it drink, none of his efforts could prevent this being my one and only professional performance.

But he does remember that the venue was a pub called the Globe. My letter described it thus: "It's supposed to be a hard club in which to sing, so it will certainly be a challenge."

* The image of Christy is an example of the street art of the great French contemporary artist Jef Aérosol whose superb portrait of Sandy Denny graced these pages recently.

** For newcomers to Salut! Live, please do not be confused by the conflicting statistics given in my running total of visits, given the rather larger figure in the country-by-country table. The latter refers to the aggregate of hits to all three of my sites - the others being Salut! and Salut! Sunderland

As you say,Colin, my memories of our one & only gig are extremely hazy, to say the least. I do remember that bloody jukebox though, as we had to ask for it to be turned off before I went on with the Neighborhood Blues band in the late 80's!
We definitely played San Francisco Bay Blues & did well to escape at half time
- Christy was a far better choice for the rest of the night than The Globe.
Keep up the good work
Phil