Home Archives Profile Subscribe
Why do the Clancy Brothers sing? Because Tommy Makem
Off to Cropredy 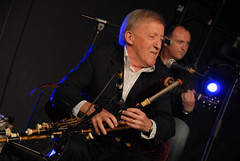 Paddy Maloney of the Chieftains
Picture: Bryan Ledgard
Early in the short life of Salut! Live, I offered a prize of three CDs, randomly chosen, to the reader who came up with the best suggestion "for what Salut! Live should aim to do/cover if it has any raison d'être beyond just another hobby for me".

The posting attracted only two replies, which was not especially surprising since Salut! Live then had precious few readers at all (we still have rather fewer than suggested by the country-by-country table down the right hand column, but that is because the figure is an aggregate of the number of visits over the past few weeks to all three of my sites: Salut Live!, Salut! and Salut! Sunderland).

But the numbers are steadily growing - as the little turnstile figure below that table shows - and I am grateful for your support or interest.

Back to that competition. One of the replies was really just a slice of Be Good Tanyas fan worship from someone who had taken the photograph illustrating my posting. The other came from "Smiley" and read thus:

My music collection ranges from Abba to Zwan and encompases most genres. However 'Folk' is a notable absentee. As mentioned in a prevous comment, The Seeger Sessions by Bruce Springsteen is about the nearest I can offer. I do have a Billy Bragg CD but it is the fairly commercial "Don't Try This At Home" so that doesn't count. Therefore, I look forward to some reviews and suggestions. I have looked longingly at the listings on the right of the of the blog with some interest, but can't bring myself to buy anything without knowing a little more.

It was a good reply. More to the point, there was none other to qualify for my consideration. So it won.

I rooted around in the garage and dug out the following albums:

The Chieftains The Wide World Over

Jackson C Frank Blues Run the Game (in a slightly battered CD box, I am afraid)

Smiley has now given them a bit of his time and come back to me with his verdict:........

The Chieftains Although I quite like this sort of music when it's played live in a pub, I would never sit down and listen to it. However, my darling wife loves it. So that's a result.

Pentangle I had heard of them, but never heard them. The more I played the CD, the more I like it. I was surprised at an almost jazzy feel to some of the songs. Not at all what I was expecting. I probably won't buy any more of their CDs. That is not a reflection on Pentangle, but is because there is so much good new music around that I don't get time to listen to, that I very rarely go back in time for my purchases. The 1st CD has survived a few weeks in my car's CD changer and that is quite a tribute. So, another result!

Jackson C Frank
I tend to find one man and his guitar albums a little boring. It's the same with this one. I can listen to one or two tracks and then my mind starts wandering. There are some good songs there though and I particularly like the opening song (Blues Run the Game). What a terrible life story. I can't help wondering at how someone with so much talent can end up in such a pitiful state. Anyway, another good CD.

Thanks for reporting back, Smiley. Glad to have been of some service. And to any of my fellow pedants out there, profuse apologies for the typos that somehow crept into this posting as originally published.