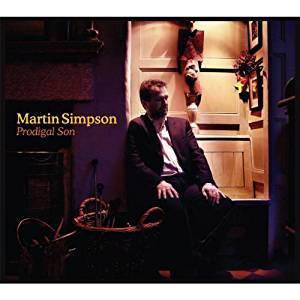 October 2017 update: Another look at the archives. You can do the same simply by scrolling down the right-hand sidebar. There's lots there and feel free to yell if you come across a dead link. This interview with Martin Simpson took place back in 2007. It may be time for an update - indeed Martin and I have agreed to another interview soon - but here, plus a chance to buy an exceptional album at our Amazon link - click here, is the story as far as then ...

Martin Simpson summons a priceless scene from his youth. There he is, back in Scunthorpe with a guitar on his knee, presumably even then making it - the guitar, not Scunthorpe - sound divine. An elderly aunt fixes him an accusing look. "Isn't that Bolshevik music?" she asks.

Here is a man who may be a cult hero in his native land, with his own peripatetic following of guitar enthusiasts. But he has also spent a good portion of his life in America, and wants us to believe that Auntie's view remains commonplace over there.

"It's true," says Martin right at the end of a long chat about life, family and work, naturally coinciding with the release of a new (and quite outstanding) Topic album, Prodigal Son.

"Back in the 1950s and 1960s, folk was considered dangerous. In fact, the American mainstream music media still regards it as dangerous."

Martin laughs at the notion of punk and all sorts of other sounds being promoted as alternative, underground music. "The truth is that folk is and has always been alternative and underground in a real sense, only that sometimes it surfaces, which is all very good."

It is probably not too controversial to claim that folk has consistently produced good and very good musicians. Nor should it raise too many eyebrows to suggest that Martin Simpson is numbered among that much rarer breed: performers who have attained greatness.

The uplifting quality of his playing, and the steady development of his vocal delivery, combine to ensure that he does not depend on folk's occasional bursts of popularity and coolness, handy as they are in serving to heighten his own profile.

For Martin has his own army. He first started noticing the phenomenon when he made trips home during the 14/15 years he spent in America. "There'd be the same faces at different gigs," he says. People were actually following him around the country.

He attributes this partly to the regularity with which he holds guitar workshops, intense sessions - one of them not too far along the road from me, in the southern French perfume-making centre of Grasse, in September - to which the same people turn up year after year.

But how many of them, listening to the magic Martin weaves on guitar (and also banjo; I urge you to listen to track two of the new album, Pretty Crowing Chicken...it's a gem), know that he took up the instrument because he wanted to be a singer?

"My dad was a (light operatic) singer, mum listened to Paul Robeson....I would hear these songs when very small and really want to sing, too. The guitar was my vehicle to accompany songs, but very quickly took over. Yet talk to anybody, they will tell you commitment to the material is the driving force, way beyond just being a guitar player. If you ask me which guitar players I like, well firstly I don't very much...that's not being snotty, just that it's always been what I use to express songs."

Memories of his father fittingly provide the dominant feature of Prodigal Son. The song a lot of people are going to find sticking tightly in the mind is about him. It's called Never Any Good , which perhaps needed the next two words of the chorus - "with money" - to soften the judgment on a man he adored and admired.

As the song develops, Martin's affection for his late dad - he died a quarter of a century ago - shines brightly enough. His mother, who died only this year, would have recognised the lyric as a whole as a fair and honest assessment of her husband, he says, "though there was a period when she would absolutely have hated it".

"I wrote it out of love, anger and gratitude," he adds. "I certainly never regarded him as feckless, or as anything other than a really lovely source of everything that was good in life."

He aimed for no universal home truths with the song, yet is constantly approached by fans who tell him: "That wasn't about your dad, it was about mine."

One of the most refreshing aspects of talking to Martin is that the strength of his love of folk music and especially song is so apparent. "I still listen to a lot of the traditional music that inspired me when I was 10," he says. "That's because I still hear things in there that I haven't heard before.

"Some people say it's such a simple form of music but I find it deep and complicated. It works on lots of different levels."

But it is the musicianship, and above all the guitar playing, that most attract that loyal following. Learning to play as a boy, and developing as a young adult, Martin was influenced by numerous others, from Nic Jones and Martin Carthy, and of course Bert Jansch, John Renbourn and Davey Graham, to Doc Watson, Blind Willie McTell, Blind Willie Johnson, Son House and Reverend Gary Davis.

Ever fretted at the realisation that no amount of practice could ever bring you to within a million miles of Martin's standard? Well, he has reservations about his own, too.

"I am not as good as I'd like to be," he says, stretching belief. "But I think in terms of using the instrument to express something, to open hearts, and I do think I am good at that.

"A lot of people by the time they're 40 (Martin's 54) are just coasting. They've stopped pushing
any more. I didn't do that. I really value my relationships with the instruments I play and we have a great time together, me and my guitar or banjo."

At the workshops, he makes no attempt to discover the next Jansch, or Renbourn, or indeed Simpson.

Life is also making Martin happy just now. Since his "uncomfortable parting" from his former American wife and musical partner, Jessica Ratcliffe, he has remarried, to Kit, daughter of Roy Bailey, himself something of a national institution, and they have a two-year-old daughter.

No special insight is needed to suggest that reaction to Prodigal Son, out later this month, will probably make him happier still.

Saw Martin at the folk club in Washington (T and W, not DC)last year and he was fantastic. There were groups of men who had come to watch him and they spent the whole set with their eyes glued to his fingers, watching him play. Male groupies rule ok