In favour with Kate Rusby

Even on a day when the temperamental, clanking old lift was working, the concierge would have struggled with the big carton newly arrived in Paris.

Somewhere between south Yorkshire and the rue de Rivoli, the brown tape had started to come away. The cardboard was looking a little sorry for itself and the contents threatened to spill out at any moment.

But they didn't, at least not until I had plonked the box down on the kitchen table of our fifth-floor flat.

It was the Rusby family's smashing way of saying thank you for a small favour. I had written a biography of Kate, with what I was pleased to call the bonus track of a second piece, on her fear of flying, for her web site.

At the time, Kate's sister Emma, who efficiently juggles motherhood with busying herself in the family cottage industry that is KR and Pure Records, had asked what I would want to be paid. 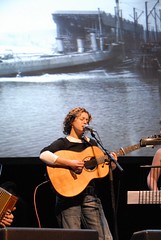 Rehearsing The Radio Ballads Live, Glasgow, Jan 2007
Picture: Bryan Ledgard
Since there was every chance that I would be reviewing Kate in a paper that then paid me a good staff salary as a correspondent, I felt the right answer was: "Nothing at all." I recall making a joke about my reply being different to what it would be if they asked me again after the Telegraph tired of employing me.

If the package from England had arrived after they did indeed tire of doing so, instead of before, it might have seemed like an emergency food parcel for a distressed and redundant hack stranded overseas. It was. in any case, a lovely gesture and one I will not easily forget.

And yesterday came signs of another show of gratitude. Checking the origins of a sudden, and welcome, burst of visitors to Salut! Live, I noticed that several people had come direct from Kate's site.

Her dad Steve had been true to his word and put up a couple of links my way. He also offered a tasty one-liner on my sacking by the Telegraph: "Sorry to hear about the job but £$%@ 'em if they can’t take a joke."

Thanks to the whole family, and to those of Kate's fans who followed the signposts. There is not quite as much here yet as I would like, but the archive is steadily growing and I hope there is enough to entice you back.

My first encounter with Kate was a few years ago, when I travelled up to the former pit village near Barnsley where she had just bought her home. She was a terrific interviewee, warm and chatty, and gave me the folkie's dream quote, one I have often since repeated, about being quite pleased that folk music was not for everyone.

This is a later version of the same thoughts, expressed to me when we met years later in in the implausible surroundings of Canary Wharf:

People still tell me they don't care for folk music, but that they like me. But in the end that's all I sing and play, folk in almost its truest form. I've never minded it being a minority music. It's like a rare diamond; if everyone looks at it, it might seem less special. I like it that people have to look that bit harder for it."

We have run into each other on two or three other occasions, once again in London - a rather special evening in the luvvies' bar of choice, the Groucho, in the company of people like Stephen Fry and Anna Friel - and also in Scotland.

It hardly adds up to a close friendship. But the Rusby clan - Steve and Ann and all three of their young'uns, Joe included - have always treated me as if we'd known one another for decades.

And I hope I bump into them again. For now, it is important for to acknowledge a favour returned - twice over.