Alan Johnston, the BBC man whose picture has appeared here for several weeks, has just been freed after 16 weeks of capitivity in the hands of Islamist fanatics in Gaza.

I am delighted at his release and will soon remove the photograph.

But as I have said at my other sites, Salut! and Salut! Sunderland, I will keep it for most of today, mostly as a mark of respect for all those around the world who are victims of the singularly inhuman act of taking a person hostage and using his or her life, safety or freedom as a negotiating counter. 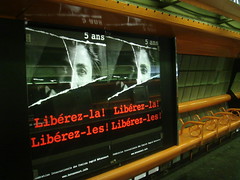 And I aim that thought at kidnappers of any religion or none, and their victims, ranging from Ingrid Betancourt in Colombia to thousands of less publicised prisoners around the world.

Isn't this tremendous news Colin? Most people I spoke to were resigned to the fact that it might turn out badly. All credit to you and everyone for keeping faith - whether the constant media and friends' protests were a factor, we'll perhaps never know. But it seems to me this kind of groundswell support must have an influence, even if only in the longer term.