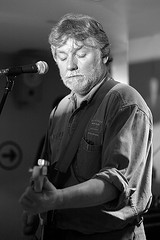 If Fairport did indeed start as just another product of a phenomenon so British, so conventional as young pals forming bands, they quickly showed themselves to be a cut above, becoming one of the world's first and probably its best folk-rock group.

Those four decades have seen music of the highest order flowing from the different line-ups. Bill Taylor, in the comments already left on this site as the article develops (a clever way of saying I'm taking my time), wonders if the current ensemble isn't the best ever.

And to my instinctive response - "that cannot be, there's no Sandy Denny" - he replies that Fairport should be judged as a different band from the one that, in not one spell but two, profited immeasurably from Sandy's presence.

Whoever is right, the exchange does help to establish the point that we are dealing with a living, changing, valid band, not some relic of the Sixties that trundles around the northern workingmen's clubs in the manner of Merseybeat bands and, even before them, Bobby Vee* and Del Shannon**.

"We have absolutely nothing to do with that scene," Simon declares at mention of the criticism, unjust as it surely is, that I have occasionally heard levelled against Fairport. "The only sense in which we are a Sixties band is that we started out then."

Thoughtful and highly articulate, Simon points out that the bands truly conforming to that description have, in fact, turned into "living tribute bands to themselves", each re-creating its own string of hits and each member trying to look much as he did in his moment of fame.

Going to see a Sixties band, he says, is to "collude with them in being taken back in time to a particular era". With Fairport, "it has never been like that - it has always been about tonight's gig".

"There is plenty of reflection in our repertoire. the history is there, people can look back at it and that's great, but it's not essential to the experience. We have never been slavish about the past. We constantly try to move forward, while remaining very proud of our heritage and being grateful that it's there."

On the Friday night - Aug 10 - of this year's annual Cropredy festival, that heritage receives a noble homage of its own.

With the obvious exception of Sandy, the line-up that recorded the magnificent Liege and Lief in 1969, will give a start-to-finish rendition of what was named in the 2006 BBC Radio 2 Folk Awards as the most influential folk album ever.

I have not always felt comfortable with attempts to present Sandy substitutes, but Chris While is a great choice as lead singer.

The line-up otherwise is formidable: Simon plus Ashley Hutchings, Dave Mattacks, Dave Swarbrick and Richard Thompson. It could be one of those memorable festival moments, except that this moment will stretch to 50 minutes.

And the album repertoire, which I take from the Fairport fans' site Expletive Deleted:

If a feasible way back from France presents itself, Salut! Live will be there.......

Is it heretical to suggest that they're better now than they were then; that their current lineup is the best ever? I've seen them twice in Toronto FAIRLY recently (the older I get, the more the years roll into one another). Their musicianship is stunning. I cherish the memory of Gerry Conway closing the first set with a perfect take on Sandy Nelson and announcing: "That was 'Let There Be Drums.' Now... let there be drinks!" No argument from Dave Pegg who was wearing a T-shirt saying "The liver is evil and must be punished."

Interesting view, Bill, and one that will leave Simon and the rest dead chuffed. I applaud their admirable longevity -and the fact that they remain a thoroughly good band - but best line-up ever? I have to remain true to my convictions and mutter yet again: "Sandy Denny."

Sandy Denny, I grant you, is irreplaceable. So, yes, they're a DIFFERENT band. But one with a stellar lineup. Chris Leslie and Ric Sanders are breathtakingly accomplished.

To hark back briefly to Christy Moore, I've been downloading some of his stuff from LimeWire and its cousin FrostWire, which never fail to come up with interesting bootlegs. CM's done a lot of singing with the Pogues who, in turn, seem happy to appear with almost anyone. It brings to mind the old joke:
Why did the chicken cross the road?
To cut an album with the Chieftains.
They're coming to Toronto soon and, from the promo pix I've seen, seem to be a shadow of their former selves. Down to a quartet?