Home Archives Profile Subscribe
Del Shannon, Bobby Vee and me
Cropredy competition: the dying hours, and news of a winner

Fairport: so British, so conventional (2)

With half my files from Paris still in cartons in the garage, despite months having passed since my move, I cannot be sure how many years ago I first had the thought - and committed it to print - that Simon Nicol's vocal delivery had become a key to Fairport Convention's enduring appeal. 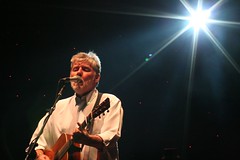 My point was that his voice had developed so strongly that he was the solution to a post-Sandy problem I identified as "who do we get to do the singing?".

Not everyone agrees that the problem was as acute as that in the first place. Dave Swarbrick has been hailed as having the perfect folk-rock voice. Salut! Live, as may have become clear, is a passionate fan of Swarb, but feels that description is, to say the least, extravagant.

In our conversation, Simon hinted that he saw some truth in my original assessment: "We did our best to muddle through.......and by dint of application, I managed to educate myself in what to do with the voicebox and chest, to make it more appealing, more under my control.

"I like to think that whatever job I might have chosen, I would be better at it now than when I was 16. Theory won't get you very far; experience and learning are worth much more and it's the same whether you are a brain surgeon, a carpenter or a musician."

Even during what Simon calls his sabbatical from the band, "working in the next field" with Richard Thompson and early Albion Band and on other projects, he was eager to keep on learning.

And the departure from Cropredy organisation of Dave Pegg's wife, Christine, amid the break-up of their marriage, created a new and unfamiliar workload.

In most unbandlike fashion, Simon disciplines himself to keep respectable office hours for this part of his life, walks to the office in Chipping Norton and wades dutifully through the foothills of the festival paperwork.

Cropredy brings together thousands of people who share an attraction to Fairport but discovered the band in different ways.

There are the folkies who found folk-rock, in the late Sixties or later (I believe Fairport at their peak were the best of the lot, but will never forget the electrifying thrill I felt on hearing Steeleye Span's Please To See The King for the first time).

There are rock fans who discovered a liking for traditional songs and tunes, perhaps when they were students and caught early Fairport at college gigs. Then there are the people who may now be adults but attended their first Cropredys in mothers' wombs.

"And there are those who discovered us by accident," Simon adds. "They reached us having heard the younger folk artists such as Kate Rusby. Our longevity has made us part of the establishment, part of the background to the whole scene."

Fairport's initial success, he feels, was built on the features that distinguished the band from most guitar-and-drumkit outfits. "We had an ear for singer-songwriters from the West Coast, and we had a girl singer - Judy Dyble at the beginning - which made us visually more memorable. Most of our contemporaries were dabbling in post-Merseybeat or the early days of far-out psychedelia whereas we were presenting interesting songs with strong melodies."

In a band full of "timid people" - Simon's phrase - Judy was perhaps the most retiring of all, certainly in terms of stage presence. "At the time, she had a small voice, was quiet with a bookish disposition and didn't really come across as a strong stage personality. But I would add that in recent years, she has come right out of her shell musically and done some very interesting things, raising her profile enormously."

And of course, she involves herself fully in the Cropredy experience. "That's the thing about Fairport," Simon says, "nobody gets out alive."

When those words slip from his lips, he is obviously thinking of past Fairport members still living, not Sandy, Martin Lamble and other casualties who were associated in some way with the band.

"We're a bit like a family in that regard," he says. "You may not see every member of the family every single Christmas, but you will always be family. You might emigrate, have rows and so on but you're still family."

And Sandy's spirit lives on as an essential component of that extended family.

Simon worked with her in her first Fairport stint, but was not in the band when she returned. They remained close nonetheless.

"I considered her my friend, almost my sister-in-arms, even if we didn't work together after I left the band and even if I made only three albums with her. But she was beyond doubt one of the big changes that occurred in the band's life.

"The first was getting discovered and going under management when Joe Boyd took us under his wing. The next big step was Sandy joining, which took us into another period. The dynamics of the band shifted utterly and we all had to play musical chairs in the presence of this very strong new personality."

Quite apart from her towering qualities as singer and songwriter, Sandy Denny brought with her to Fairport a vast repertoire of traditional material.

Yet Simon thinks the definition of Fairport as folk-rock has always been slightly misleading. While traditional material would account for perhaps 95 per cent of Steeleye material, "our percentage tended to bump along in the teens".

Whatever the percentage, folk-rock irritated some purists. "There were elements of the folk world that were very protective of their own little corner, and wanted to keep the repertoire under glass. They didn't recognise what has always seemed blindingly obvious: that there are really only two sorts of music, the kind you like and the kind you don't."

If there was nothing unconventional about young men in the Sixties forming a band, Simon realises that to have stuck at it for so long is unusual. Convention would have taken him into some other career that that of a "touring musician in the cottage industry that is our little band". But he has no idea what that work might have been.

"I don't think about it - I am just very pleased that this turned out to be a career for me," he says. Next ambition? Once Cropredy is out of the way, to have a "big lie down". And then, perhaps, to prepare for Fairport's next 40 years.