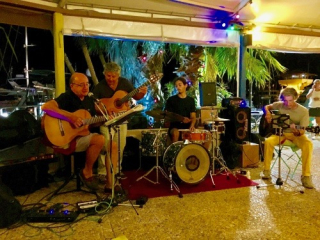 Since Salut! Live has been a lot livelier of late, and even attracting a few readers, I thought it might be a good idea to share with newcomers the way I introduced the site at its launch 10 years ago. There have been changes: I stopped writing on folk for the Telegraph when I was appointed to a new job in Abu Dhabi (it felt good to be firing them instead of the other way round).

Post-Abu Dhabi, I divide my time between London and France and still write regularly for The National, the newspaper I helped to launch in the UAE in 2008. I have had news and features published in the Telegraph since my return to Europe but so infrequently that it hardly counts. It is unlikely, in any case, to happen again (my choice again). The photograph you see above is not the grainy one that accompanied the original posting but one taken much more recently when I played a couple of songs with my friends New Deal at the Gecko bar in Le Lavandou, France.

Otherwise, the article is as it appeared in 2007 (so some of the references are naturally out of date). It is up to readers to say how well I have lived up to the self-billing but I do hope everyone who strays on to these pages finds something of interest...

May, 2007: You are all warmly welcome at the birth of a new site intended to appeal to lovers of folk music.

Folk is what I call it. I no longer hold reactionary objections to the word roots but have lingering doubts about world, which strikes me as a definition that, taken literally, can exclude nothing.

If Louis Armstrong somehow got away with saying all music was folk music because "I ain't never heard no horse sing a song" [but see Comments], the man who invented world as a generic definition should perhaps be sent into solitary confinement.

There are phrases you will not catch me using at all, or at any rate not after today unless it cannot be avoided. Nu-folk. folktronica and the rest. Babyish babble or crass marketing tools, they are taboos as far as I am concerned.

If those introductory remarks send trendier people scurrying for cover, so be it. I cannot pretend to be what I am not. And yes, I'm the ugly sod pictured above.

Folk, a description sometimes derided for its supposedly cosy, middle-class connotations when the music should be rougher and angrier, was good enough in my County Durham youth and there was nothing twee about the pubs and clubs where it was played then.

But I have no wish to impose my views on others. The comments field will allow any number of nu-folkers, folktroniques and the rest. You might even rattle my cage. I do not expect everyone to agree with my views.

So what will the site do? What is it for? Well, it is the second offshoot of my French blog Salut!, which I launched after being made redundant in moderately controversial circumstances by The Daily Telegraph (29 years on the paper, the final two and a bit as Paris correspondent).

The first son of Salut! was Salut! Sunderland an unashamedly partisan football site which. as you'd imagine, is [was!] currently en fête.

Salut! Live will be hot on lists, and maybe in time competitions and other forms of reader involvement. Lately I have been up to my neck trying to earn a crust from the French elections so progress may be sluggish at first.

My background in folk music is that I have written about [wrote] and reviewed it for the Telegraph for not far short of 20 years, and the arts pages asked me to go on doing so after I was fired. A CD review appears [appeared then] most Saturdays.

The better articles that resulted from those interviews will in time be available as links. In the more distant past, I was a folk club organiser - in the Durham towns of Shildon, Darlington and Bishop Auckland - but took care to inflict my own wretched singing and guitar playing on as few people as possible.

For now, just try to bear with me, let me know if you have any thoughts about how the site should develop and make sure you tell me about anyone I - and other visitors to Salut! Live - should be listening to.

My choice of picture - Kate Rusby and Kathryn Roberts - enables me to offer, straight away, my first list. It's the one I produced for the Telegraph when asked to nominate the 10 best folk albums of the 1990s, and I shall put it up here as my second posting. 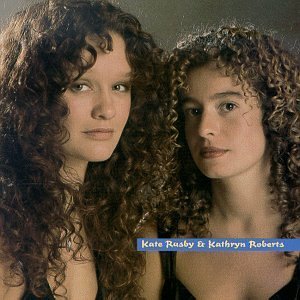 Kate and Kathryn [the album can still be bought at this Salut! Live link] were my stars of the decade and have separately gone on to do excellent things since. As for the caption, maybe I should add that the last time I nominated one of them as "Barnsley's finest", someone wrote in to disabuse me; only Dave Burland qualified for that title, he declared.

Oh, and why cool folk? Well I see no reason why people who love folk should not consider themselves cool. Beyond that, Coolfolk was the name I originally planned to use for a folk site, to the point that I registered it with one of those online operations only to fail to get to grips with bringing it into life.

have alisten to stanislas or the lost songs, you can hear snipets on myspace, I now sing them alone alone on guitar and needless to say find gigs in europe and us but not in uk which is a shame cos I live here1
regs nick garrie

Dear Ed Pickford - (1) I'm sorry you've been ill, my mate is 15 years plus now and I'm 4 1/2, it's all luck, no virtue and no bloody god! so, best of luck... anyway, lets not be defined by some illness (to be sung to the tune of the Trimdon Grange Disaster)

(2) Now, I saw and recorded you lot, The Northern Front at one of the Durham Folk Festivals in the 70's, and yes you were funny, and I have listened to the tapes since and the memories are as good as the recordings (or the other way round, red wine seldom aides writing!). A gang of us traveled to a number of the festivals, from '73 (no recordings, kept dropping the mic due to being not quite myself), (later festivals recorded with an auto recorder) - up to when Ian ? decided they could no longer keep the festival going. We always enjoyed the weekend, I even cycled one year over two days from Bolton.

Anyway, I just wanted to let you know that people in Bolton still have very fond memories of the Northern Front, and later of you as a solo act, and yes ofcourse no one could forget Jim Sharp's voice and choice of songs, yours and others

I know, having this detail seems sad, but the truth is much simpler, I rarely scrub live recordings, and years later I have dipped into my Durham recordings - it shows us how short all this life business is. Right Ed, all the very best Gus McKenzie 63 1/2, 1 wife, 4 daughters, 1 dog.

Colin,
Apols that it has taken me so long to come across your fine blog.
As a music writer myself, and someone still soccer mad at 67, I think I will find a natural home inside your portal. Real mental food here for me.
Just one tiny nit-pick re the above page: yes Satchmo DID say those those words that you and many others attribute to him, but he said it when the hootenanny craze of the early 60s was driving lots of other forms of music from the music scene, and some jazz clubs were switching to being FOLK CLUBS instead.
And it made Armstrong a bit miffed, so he deliberately stole this great line from Big Bill Broonzy. He had coined it several years before, and search online and you wil even find details of the radio broadcast where he first used it.
But a minor problem. Your blog is a fine one, Colin.
BTW...If only I got a bob for every time I have informed people of the true source of that great line!
But, I guess that people will go on claiming it was Armstrong in perpetuity.
Pity.
But it is an inevitable negative aspect of the internet, I guess.
Amazing how the genius who thinks up a line is often deliberately forgotten, and the blighter who purloins it, is suddenly made its FATHER !!
Take that great line on the difference between knowledge and wisdom...
"Knowledge is knowing that tomato is a fruit and not a vegetable: wisdom is knowing not to put it in a fruit salad"
Some years ago, Will Carling stole it so as to appear witty in an after dinner speech.
And guess what?
At the end of that year, two national newspapers included it in their Quotes of the Year column! And yes...you have guessed...attributed it to Carling!
One could not make it up, eh?

Christmas 2014 with all its demands on one, has come and gone, and I have finally the time to come back to your fine blog and see if my initial contribution of 23rd Dec has been posted.
And it has!
Thanks for posting it Colin.
Just one mea culpa though: I can hardly claim the intellectual high ground on the Broonzy/Satchmo quote, when one spelling error of mine just screams out at me!
I have just noticed that I have missed an N off "hootenanny".
Apols.

Fixed in the original comment. Dai. Many thanks for sharing your thoughts and greater knowledge